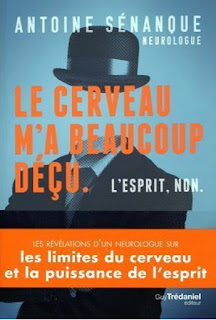 After 30 years of practising medicine, a neurologist reveals his disappointment with the object of his practice, the brain, and with the limits of science. And demonstrates the power of spirituality and faith.

A doctor heals and the patient heals. A doctor in neurology treats but the patient does not heal. A doctor who does not heal is a frustrated doctor! In a language totally accessible to all, Antoine Sénanque shares with us his scientific and philosophical investigations and develops four key ideas:

- First idea: The mind is not a property of the brain. It goes far beyond it, and uses it as a magnificent tool for dialogue between the body and consciousness. The power of the brain is overestimated by today's science, which refuses to consider the idea of a larger consciousness that would link all individuals in space and time.

- Second idea: Spirituality is a healing force. When shared collectively, this force is multiple and no disease should be able to resist it.

- Third idea: It is useless to justify scientifically the phenomena related to these forces of spirituality and the recourse to quantum physics, which sometimes seems to agree with them, is an illusion.

- Fourth idea: The rehabilitation of belief as the power to understand phenomena. Its grid is made up of intuition, feelings and impressions. Because of the excesses of religions, mistrust has been established against all the spiritual forces drained by faith. A fantastic spiritual energy has been sacrificed. This spiritual force should be collected and fed in agreement with science, which should make an alliance with the humanities.

This book will be of interest to both the open-minded medical profession and any audience interested in a different vision of science, the brain and spiritual awareness.

Antoine Sénanque, whose real name is Moulonguet, is a Parisian neurologist and an author known for his strong positions. He is the author of several successful essays and novels.